Advice for travelers to Marrakech

IPPL’s favorite investigative zoologist and photojournalist Keri Cairns is in Morocco this month, and he is bringing us on-the-ground reports about that country’s native Barbary macaques. And this important advice:

“If you do visit Marrakech, please don’t pose for a photo with the monkeys. It’s one of the many problems they face that is helping drive them to extinction.” 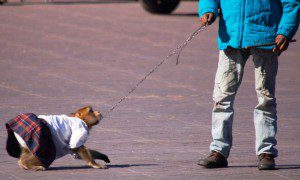 A Barbary macaque on a chain, used for tourist photo-ops in Marrakech.

Keri explains: “The Barbary macaque is the only African species of macaque; the rest are all found in Asia. Commonly known as the Barbary ape, it is really a tailless monkey. It is found in the mountains of Morocco and Algeria and is the only African non-human primate found north of the Sahara. There is also an introduced population on Gibraltar.

“For about a month, I’ll be traveling in Morocco and beyond to report on the situation facing these monkeys and to introduce two organizations working hard to conserve this charismatic species: the Moroccan Primate Conservation Foundation (MPC) and Barbary Macaque Conservation in the Rif (BMCRif).” 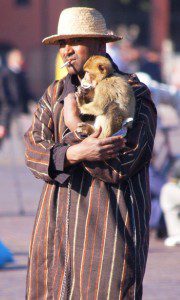 A monkey handler in Djemaa el Fna, the main square in Marrakech.

“My first port of call was the main square in Marrakech, Djemaa el Fna. This is one of those places that every traveler should see. It’s a hive of activity from early in the morning to late at night and has been named by UNESCO as a cultural heritage site.

“Unfortunately, alongside the acrobats and story tellers there are also snake charmers and monkey handlers. They hijack anyone who gets close with either a snake or a monkey. Then they charge you for a photo. 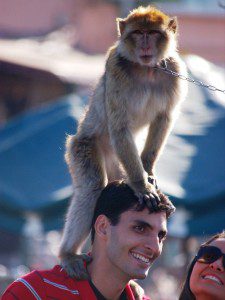 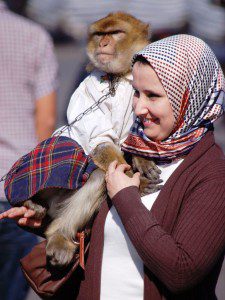 “On the day I was there I saw four groups of monkey handlers. Each group had several macaques out and several in tiny cages. Many of the macaques that were out were garishly dressed and had a nappy/diaper on. They ranged from young babies to adult females, and each was dragged about by a chain around their necks.”

But, as Keri tells us, here’s the really sad part:

“Each of these macaques used for these ridiculous photo-ops has been taken from the wild, where there are only 4,000-6,000 left to roam free. The Barbary macaque is now officially recognized by the IUCN as an endangered species.” 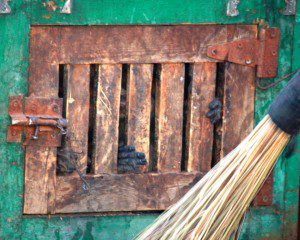 After being forced to perform, this is the home they return to.