Dianne Taylor-Snow has been a wildlife crime investigator and photojournalist for IPPL for 25 years. She’s also a dedicated board member and even has an IPPL gibbon named after her. She recently visited IPPL for a few days, and she shared with us her reminiscences about one of IPPL’s signature cases: the smuggling of six infant orangutans. It’s how she got involved with IPPL in the first place. 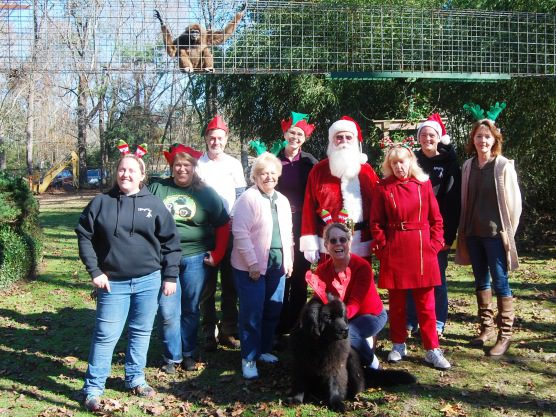 Dianne had been working with orangutans in Borneo (studying mother-infant relationships and also providing care for rescued orangutans) for five or six years. She was home in the U.S. when she got an unexpected phone call from a fast-talking woman with a British accent who was telling her something about “smuggled orangutans… Bangkok… you’re the only person who can help… how soon can you be there?” 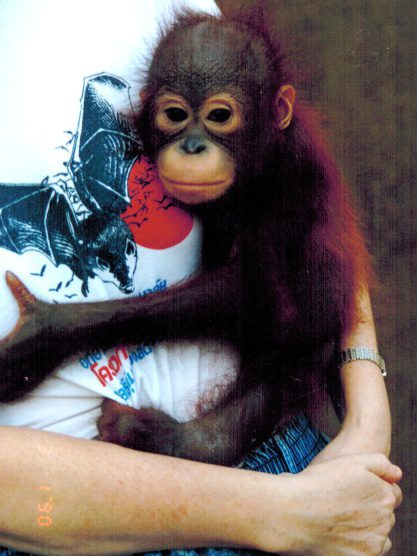 Thomas was one of Bangkok Six: six infant orangutans smuggled out of Indonesia and discovered at the Bangkok Airport.

It was IPPL’s founder and executive director Shirley McGreal, whom Dianne knew well by reputation. Dianne asked Shirley to slow down a bit, and soon the details became clear. Shirley had learned that six infant orangutans had been smuggled out of Indonesian Borneo via Singapore. When airport workers in Bangkok heard what they thought were babies crying in the cargo area, they x-rayed a pair of crates labelled “Birds” and saw what looked like three infants packed in each box—upside down. The authorities finally opened up the crates to discover six very sick little apes whose lungs were starting to fill with fluid. The orangutans were promptly confiscated by the Thai government. 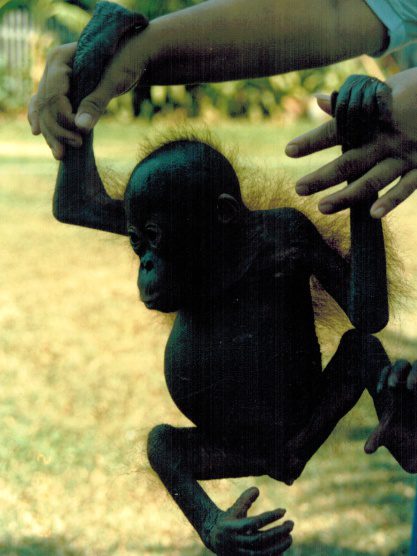 Ollie was the smallest of the six orangutans. They were shipped upside down in two crates marked “Birds.”

Once Shirley was contacted about the situation, she reached out to Dianne, who came recommended for her patience and for her primate experience both in the zoo and the field. Dianne was eager to help and asked Shirley how long the assignment would be. “One month,” Shirley said. Dianne was in Bangkok four days later. 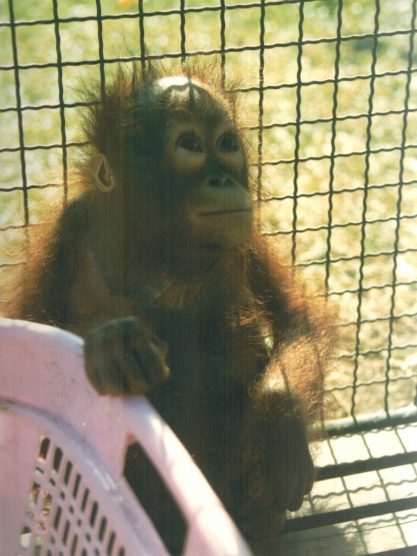 Fossey and her fellow orangutans were cared for by Dianne Taylor-Snow until they could be sent back to Indonesia.

She found out that the veterinarian had been treating the infants with medications meant for dogs. Dianne put a stop to that and began coordinating with a pediatrician. A hospital near Dianne’s home in California had donated supplies used to treat human infants (including premie diapers), and Dianne got to work nursing the babies back to health. 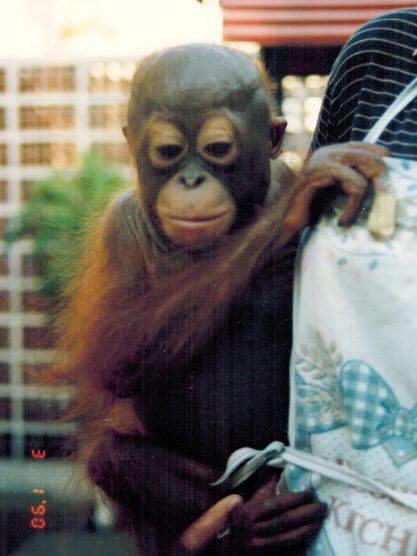 Tanya and the others were supposed to end up in Russia.

As the weeks passed, Dianne’s job description began to change a bit. She started taking part in negotiations between Thailand (which wanted to put the babies in a zoo) and Indonesia (which wanted the apes back). The protracted back-and-forth even caught the attention of the global press. 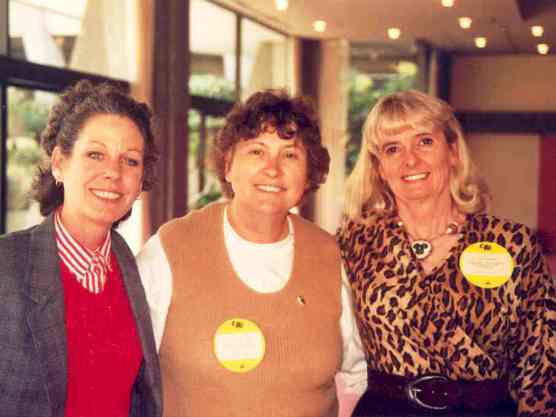 Months later, in a special ceremony, the Thai government finally handed over the infants to the Indonesian authorities. Dianne had been living with six young orangutans in a Bangkok house belonging to Leonie Vejjajiva, founder of the Wild Animal Rescue Foundation of Thailand. Now the six youngsters, no longer cargo, were treated to first class seats on a Garuda Indonesia airplane, riding in the laps of Dianne and some volunteers. 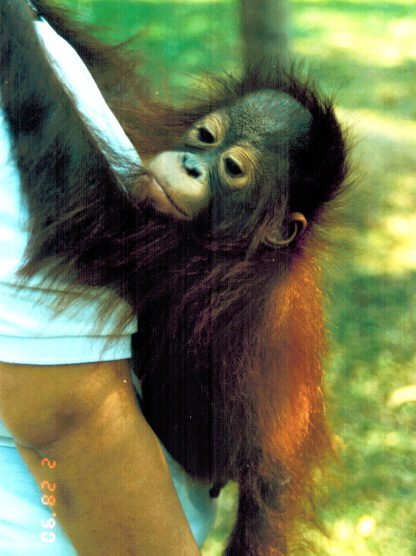 Bambi and the rest of the Bangkok Six were part of a smuggling operation organized by Miami animal dealer Matthew Block.

They landed in Jakarta, caught an Indonesian military transport plane to Borneo, and boarded speedboats to get to a quarantine camp in the forest, where their rehabilitation could begin in earnest. 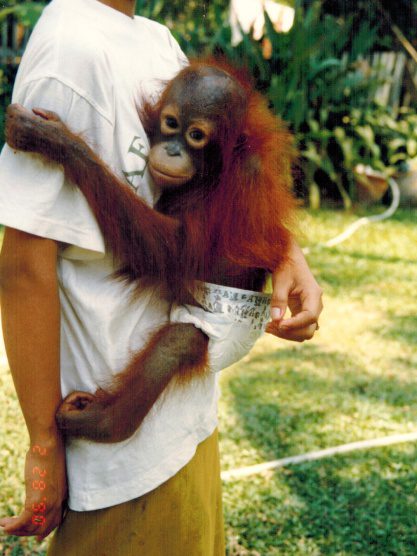 Bimbo and the others were eventually repatriated back to Indonesia, and, thanks to IPPL, their smuggler Matthew Block went to prison.

Meanwhile, Shirley had been running down leads on the whole criminal activity. She learned that a German national, a “Mr. Schafer,” was supposed to have met the shipment and sent the apes on to Russia. She also learned that the head of the whole disgraceful affair was a Florida animal dealer by the name of Matthew Block. She worked with the German authorities to acquire enough information to convince the U.S. government to indict him; this took two years following Dianne’s return. Dianne testified not only at a congressional subcommittee that got the case moving forward, but also at Block’s hearing and sentencing. Dianne and Shirley both suffered from death threats and other forms of harassment during this stressful period. Block ended up spending 13 months in prison. Even worse for a would-be smuggler, he forever lost his anonymity. 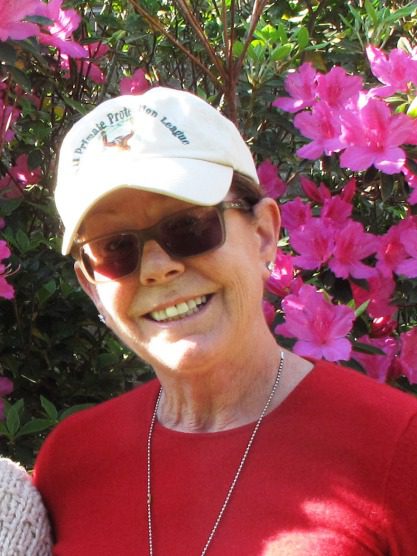 Dianne was also at IPPL’s Supporters’ Meeting in April 2014.

Prior to her first conversation with Shirley, Dianne had grown up in southern California (“on the beach!”), where she went through Brownies, Girl Scouts, and Mariner Girl Scouts (a specialized program for girls interested in outdoor water-based activities). She and her sister made friends with tadpoles and lizards. Their mom knew the name of every plant and animal they found on their nature hikes.

After Dianne got married and moved to California’s central valley, she found herself at lunch one day with a group of friends. They started to tease her, saying that the local zoo was looking for volunteers and that “we always said you belonged in a zoo!” Just to show ’em, Dianne signed up the next day, and a week later she was helping out as a volunteer keeper.

Her first day was memorable. Peggy the Bengal tiger was going into labor, and Dianne was privileged to have a front row seat. In fact, Dianne was the first human being to touch those cubs, to weigh and sex them. “I was hooked!” she said.

As a swing volunteer keeper, she got to work in every section of the zoo, and eventually she was even hired on as staff. She developed a soft spot for the primates. One day she was called over to meet a very special person: Gary Shapiro, who had taught symbolic communication to an orangutan at the zoo and had gone on to do conservation work with the great red apes in Indonesia. They talked for two hours, and when they were done, he said “See you in Borneo in October!”

She was so excited she could hardly wait to tell her husband, Pepper. But after a few days she began to have doubts: she didn’t speak the language, she didn’t even know how she was going to get to the field site…. She shared her concerns with Pepper, but he told her, “If you don’t go, you will always wonder what your life would have been like if you had.”