The sad truth about the “Tourist Group” monkeys

We’ve been following the adventures of IPPL’s intrepid zoologist/photojournalist Keri Cairns as he unravels the perils facing Barbary macaques in their native Morocco. When last we heard from him, he was at the Cascades d’Ouzoud, describing how “good monkeys can go bad” if tempted by enough easy human food. But, he suggested, things could get worse. And they did.

“My next stop was the small town of Azrou, south of the historic city of Fez,” Keri told us. “It is in the Middle Atlas mountains and is home to the last remnants of ancient cedar forest. It is also home to Morocco’s most studied group of Barbary macaques, commonly known as the ‘Tourist Group.’ 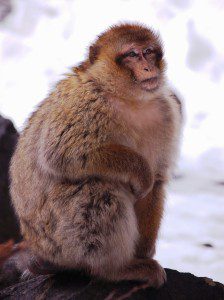 A real “chunky monkey,” one of the Barbary macaques belonging to the “Tourist Group” in Morocco’s Middle Atlas mountains.

“I met up with James Waterman, a research coordinator for the University of Lincoln, U.K. The university has been running a research program in Azrou since 2008. James had just arrived in Azrou, so we teamed up for a week. James was able to introduce me to several groups of macaques, and I was able to help him by photographing individuals’ faces, so he could draw up an ID guide.”

Barbary macaques are remarkably adaptable animals. As Keri noticed, “Only a few days before, in Ouzoud, I had been following them up and down gorges wearing only shorts and a T-shirt—me, not the monkeys! Now I had thermals and full winter gear on. The macaques had to come to the ground to forage for food, mainly acorns. We were then able to follow the monkey footprints in the snow. At some points we were trekking through valleys where the snow was up to two feet deep! 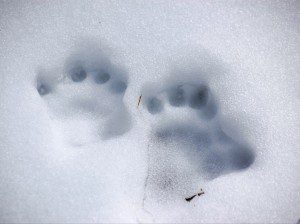 Keri Cairns tracked monkeys through snow as much as two feet deep.

“On my last day, the snow was still around, but the sun had come out again. This not only made the monkeys more active, but the tourists, as well. The road that runs past this area is the main route through the Middle Atlas mountains. On seeing the emergence of the tourists, I was reminded of the sad truth of why I had decided to come to Azrou. 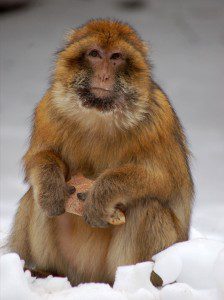 As a result of scrounging too much easily-accessible high-calorie food from humans, the “Tourist Group” monkeys experience many unhelathy consequences…

“The ‘Tourist Group’ monkeys are fully habituated. They have no fear of humans and see us as an easy source of high-calorie food—and they don’t even have to use aggression to get it. Coaches and cars would stop in the car park all day long, and the passengers would get out and feed the monkeys. Truck drivers would even throw food out of their windows as they passed, without stopping!”

The result? Keri could tell that many of the “Tourist Group” adults were overweight. He saw that many of the older monkeys had rotten teeth. A number of monkeys were showing other signs of poor health, such as runny noses—likely due to viruses picked up from contact with humans. 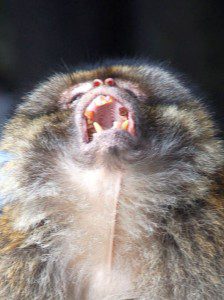 “Many papers have been written about this group,” explained Keri. “Apart from obesity and dental health issues, studies have shown that these monkeys exhibit fewer natural behaviors than normal. Obviously, they need to forage less, as they have a near-constant supply of food—but they also groom each other less. 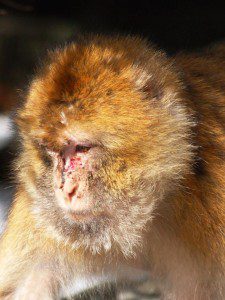 As a consequence of all these problems, the “Tourist Group” monkeys are failing to reproduce. “Last year,” Keri reported, “only two out of nine adult females successfully carried a pregnancy to term.” 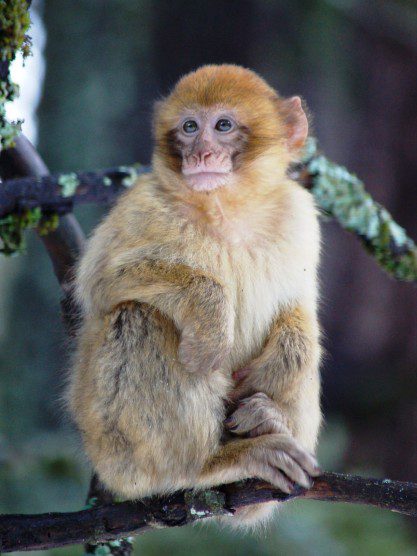 Although the monkeys of Azoud are not captive, like their poor cousins on the streets in Marrakech, their lives have been just as disrupted by human interference. Whether a tourist’s goal is a moment’s amusement by the side of the road in Azrou or on the Djema el Fna square in Marrakech, it’s the monkeys who are really paying for it. 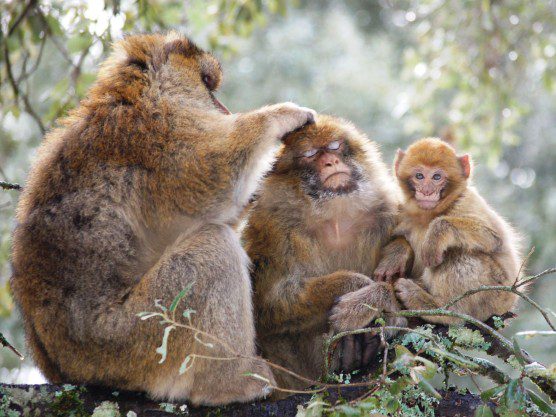 Some happy monkeys near Azrou.

Thankfully, the Moroccan Primate Conservation Foundation has just released a Conservation Action Plan for the Barbary macaque. (The MPC and the Barbary Macaque Conservation in the Rif are two Moroccan nonprofits IPPL is helping to support.) The plan includes strategies to improve the situation for the Azrou macaques by educating tourists and local people. It also includes a long-term goal to regenerate the cedar forest.

And Keri has promised to send us a report on the next phase of his Moroccan trip: an exploration of the Rif Mountains, in northern Morocco, “home to some truly wild Barbary macaques.”