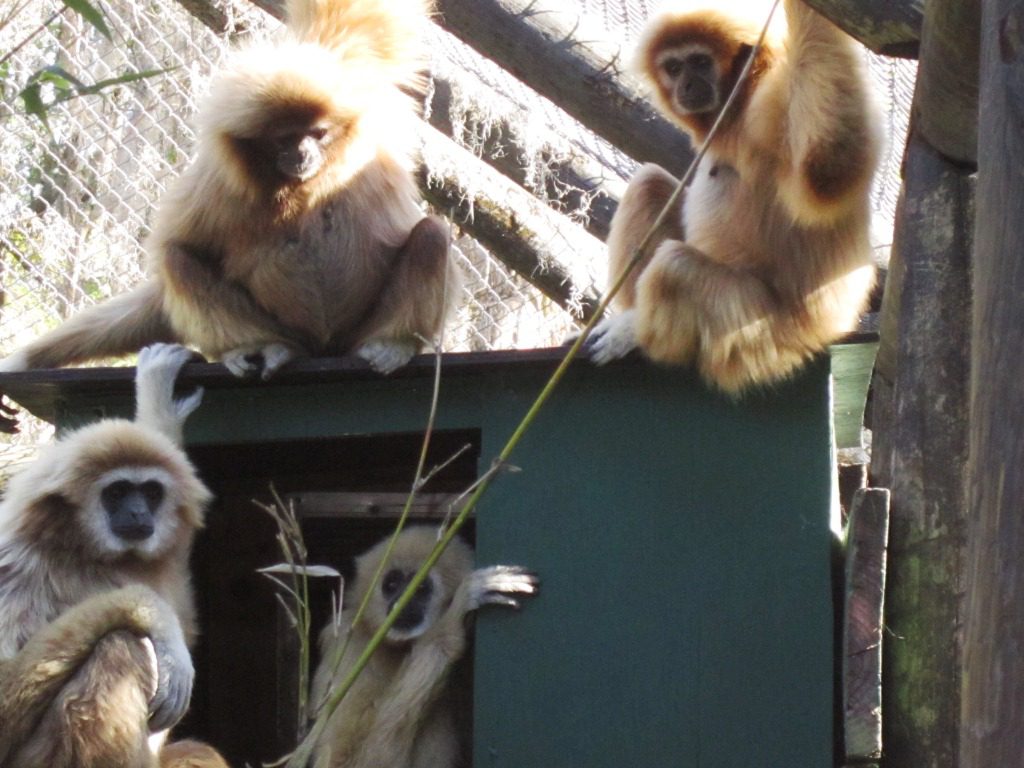 The rural area near Ocala, Florida, was once home to an amazing variety of primate species—some of whom still live there in the wild. The Silver Springs tourist attraction located there once featured a family of gibbons (who came came to live at IPPL just last month), some lemurs, spider monkeys, and troops of macaque monkeys. Now that the facility is no longer going to be showcasing exotic animals, the only primates left in the area are the free-ranging rhesus macaques. They have their own fascinating story. 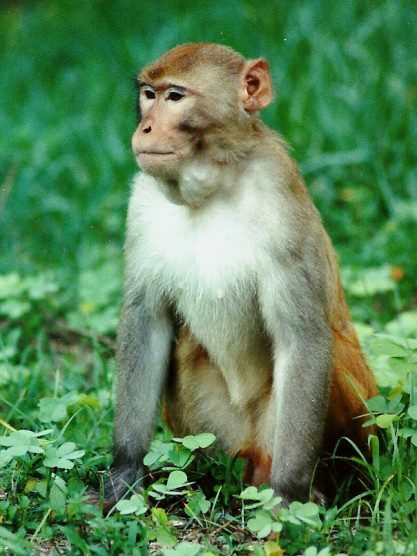 Hundreds of rhesus macaque monkeys have lived near the Silver Springs tourist attraction at Ocala, Florida, since the 1930s. (All photos courtesy of Linda Wolfe.)

Last week IPPL Advisory Board member and macaque expert Dr. Linda Wolfe paid a visit to IPPL and shared with us her experiences doing behavioral research on the Silver Springs macaques. She was especially interested in the reproductive cycles of the females. Off and on for 14 years, starting in 1981, she would travel up and down the Silver River, her small motorized boat filled with peanuts in order to entice the monkeys to within note-taking distance. 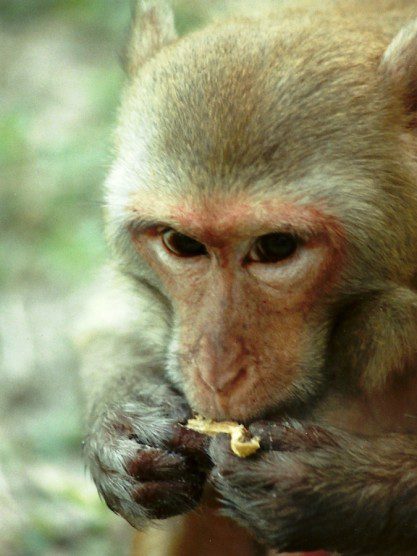 Starting in 1981, Dr. Linda Wolfe would attract the Silver Springs monkeys with peanuts so she could take observations on the reproductive rates of the females.

Linda told us that, according to local legend, rhesus monkeys had been brought to the area to enliven the set of the movie Tarzan Finds a Son!, which was filmed at Silver Springs in March 1939. As it happens, the monkeys didn’t make it into the movie (“It wasn’t in the script!” Linda said), but they reportedly watched the filming and would screech with excitement whenever Johnny Wiessmuller would dive into the water. “I think they were warning him about the alligators,” Linda mused.

In fact, Linda found out that the monkeys had been brought to Silver Springs somewhat earlier by an entrepreneur named Colonel Tooey, who operated a Jungle Cruise boat ride. He built up an island in the shallow Silver River and planned to put monkeys there at some point in 1938, with the idea of boosting his revenue.

However, Colonel Tooey apparently thought he was getting a shipment of (non-swimming) squirrel monkeys. Instead, he got six rhesus monkeys. “The monkeys were swimming off the island before Colonel Tooey could get back to his boat!” Linda said. 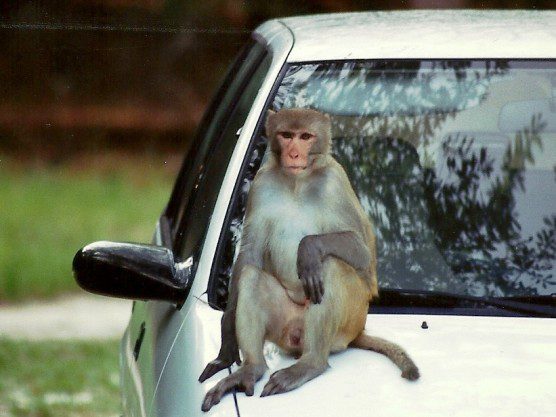 Rhesus monkeys are curious and resourceful animals. Linda would try not to take her car out to her observation sites too often because the monkeys would mess with it (they thought the side-view mirrors were door handles…).

Supposedly, Colonel Tooey later brought in a few more monkeys, but for the most part, nature simply took her course: the monkeys multiplied and divided. A couple of troops total stuck around the banks of the Silver River near the Silver Springs, to the west of the original release site. They were regularly provisioned with monkey chow, fruit, and vegetables by Jungle Cruise boat captains who wanted to lure them closer to their customers.

Some monkeys headed east to where the Silver River flows into the Oklawaha River. There, the monkeys set up housekeeping within the Ocala National Forest. No one provided these monkeys with food, except when local people would throw them some dog kibble out of charity during the lean winter months. These monkeys were—and still are—on their own. 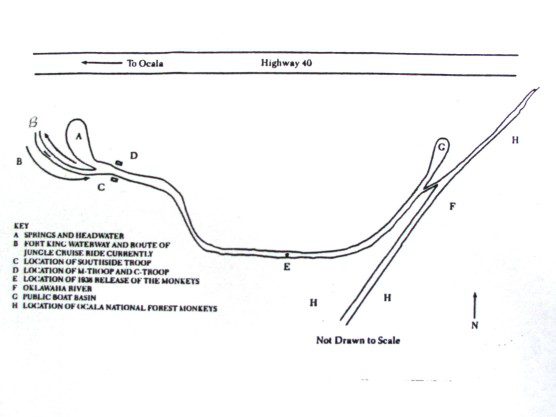 Linda’s map of the area. The monkeys quickly dispersed from the original release site (E) in the shallow Silver River. Provisioned monkeys (C and D) stayed near the springs (A). Troops of free-ranging monkeys (H) still live in the Ocala National Forest.

At the time Linda began her studies, there were perhaps 300 monkeys living near the Silver Springs and another 250 or so divided among two or three troops in the Ocala National Forest. Unfortunately, beginning in 1984, the then-Florida Game and Freshwater Fish Commission insisted upon the removal of large numbers of the monkeys.

Self-described “raccoon trappers” were deployed to carry out this mandate. At least 217 of the formerly free-ranging primates were trapped and sold to the Buckshire Corporation, which supplies animals to research labs. Others were sent to a zoo. Yet more were sent to an unknown fate. 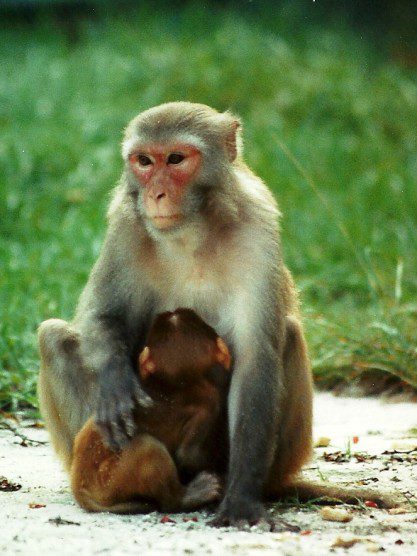 A Silver Springs rhesus macaque mother and her baby.

“I would call Shirley in tears,” Linda remembered, as they tried to figure out a way to end this poorly-conceived plan. A huge public outcry along with national TV and newspaper attention eventually resulted in putting a halt to the trapping of such massive numbers of monkeys. As far as Linda knows, no such “overt” trapping of monkeys has yet resumed.

What will happen now to the monkeys of Ocala, Florida? At least those living in the National Forest have survived with minimal human intervention for decades; they would likely be able to continue doing so on the same terms. Those monkeys who were accustomed to being fed regularly could maybe pick up a tip or two from their neighbors. Hopefully, with minimum human interference, these hardy and adaptable macaques can continue to live out their days in Florida in peace.