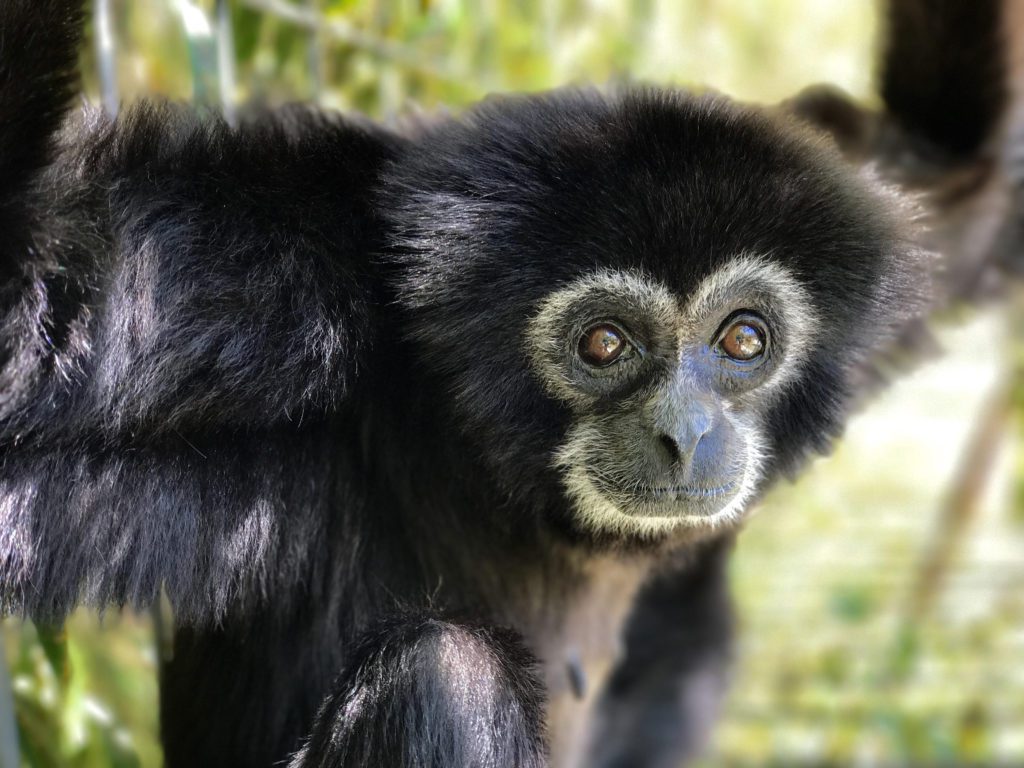 February 1, 2016 was a special day for a petite white-handed gibbon named Dorothy. It was the day she arrived at IPPL. After spending the last 40 years in in a northern zoo, and her mate had died, she was retired to the peaceful surroundings of our sanctuary and the company of other gibbons.

After a 16-hour drive, 44 year old Dorothy arrived late at night. She traveled with her keeper, another zoo representative – and a sloth! The sloth stayed overnight on his way to a zoo in Florida. But this was the last stop for Dorothy who was the only gibbon to arrive with such an unusual traveling companion.

Dorothy’s BIG day came the next morning. It was warm and sunny as the door to the gibbon house opened allowing her to climb up into the aerial walkway and look around. As far as we know, this was the first time she had a 360-degree view. She could see the trees and see and hear other gibbons. Her eyes were full of wonder as we watched her life open to the sights and sounds that surrounded her. As other gibbons sang – Dorothy sang too! We’d been told that Dorothy didn’t sing very much at the zoo. Since arriving at IPPL, “Diva Dorothy” endeared herself to everyone with her unique and powerful song.

Besides the sloth, Dorothy brought a special big mirror with her. We decided to see how the other gibbons would react to a reflection of themselves. It was such a hit that we ordered more for all the gibbons to enjoy including some that were gifts from an IPPL supporter. Another enrichment treat Dorothy shared with the other gibbons is Superworms. Like the mirrors, Superworms have become a favorite of all our gibbons.

Dorothy seemed quite normal and had even shown a strong interest in recently widowed Peppy. Then suddenly on August 20, Dorothy became ill. Emergency surgery was performed by our vet, Dr. Ohlandt, but she failed to improve. Animal Care staff stayed with her day and night, still nothing changed. On August 22nd, she left us peacefully. There was no specific cause for her death. At 46, which is quite old for a gibbon, she had a variety of issues and could not recover.

Little Dorothy obviously enjoyed every single day since she arrived early last year. Her sweet little face earned her the honor of “cover girl” on our May 2017 issue of IPPL News as well as on our 2016 Annual Report.

Even though she was with us a relatively short time – the imprint she left on our hearts was as big as her voice. Thank you for your own special ray of sunshine, Dorothy. We miss you!