Our first rescued lab gibbon came to IPPL in 1981 as a very unhappy little gibbon. Like other primates who have grown up in isolation in a barren laboratory environment, he was prone to repetitive, abnormal behaviors. He banged his head so much that he had a little callus over one ear. 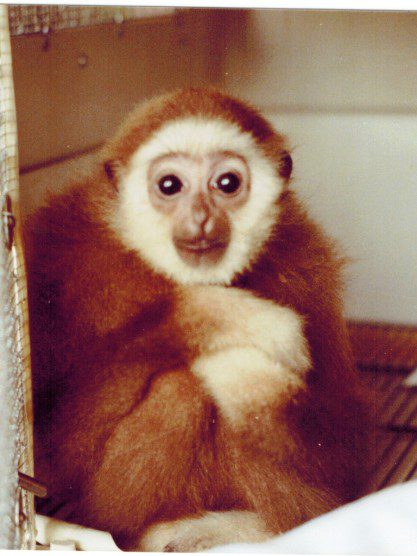 Although he was born in a lab, Arun Rangsi’s family history goes back to the forests of Thailand, where his grandparents lived free, high in the canopy. All that ended when his grandmother, who had a girl baby, was shot by poachers and fell into the hands of the animal dealer Preecha Varavaishit, who was dealing all kinds of wild animals under the business name “Pimjai Birds & Wild Animals.”

Gibbons were (and are) totally protected under Thai law. Exporting these apes was banned, but Preecha found ways to beat the law—and there was a scientist eager for gibbons at the University of California at Davis. He was using gibbons in fatal virus cancer experiments.

Preecha had several ways of smuggling gibbons out of Thailand. Once he got hold of a legal export permit for 80 mynah birds. 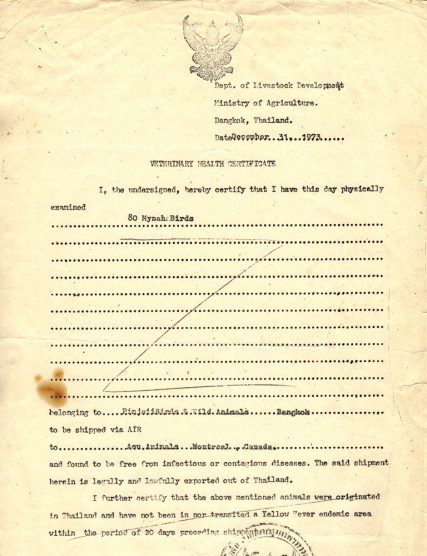 But he had an airport official type some additional text: “10 Heads, White-handed gibbons.” The Thai authorities then cleared the entire shipment for export. 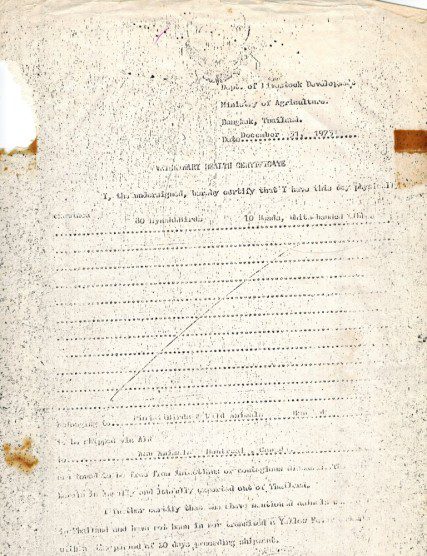 The United States would never have let these shipments in. But Preecha found a middleman in Canada: Kenneth Clare, who ran the Ark Animal Exchange. Even though Clare didn’t breed animals himself, he would ship Thai gibbons on to California using fake captive-born permits. One of Clare’s shipments of ten gibbons arrived with one baby dead from a shotgun pellet that was lodged in the animal’s brain; only four ultimately survived that trip.

Somehow, a female gibbon numbered HLA-2 reached the UC Davis lab and was used for breeding. There, on August 9, 1979, she gave birth to the baby who was to reach IPPL two years later.

She rejected her baby, or so we were told. His lab record sheet notes “multiple abrasions over body.” He was placed with a “swinging wire surrogate.” He was identified as HLA-98, but he had no name. He was always sick, with pneumonia, severe diarrhea, and breathing problems.

In 1980, the lab was notified that the National Cancer Institute was ending funding for the gibbon research. Around 50 gibbons were sold to animal dealers, zoos, or other labs. But nobody wanted tiny HLA-98, who weighed only 2.2 kilograms (4.8 pounds). IPPL was tipped off that he would be killed, so we contacted the lab director. Fortunately, he agreed to let us “adopt” this sickly little gibbon. 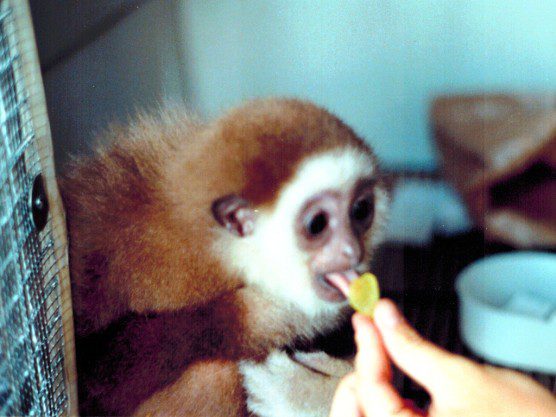 When Arun Rangsi arrived at IPPL, he quickly learned to love grapes.

We also contacted our supporter Katie Buri in Thailand and asked her to go the Temple of the Dawn in Bangkok, place the little ape under the protection of the Lord Buddha, and ask the monks to select a name for him. The name they chose was “Arun Rangsi,” which means “The Rising Sun of Dawn,” or literally “Dawn Color Blue.” Katie also sent funds for his upkeep. We notified the lab director, who replied, “I feel that the funds may be more useful for ‘Arun Rangsi’s’ trip to you as the sponsor of this ‘adoption.’”

Finally, on August 9, 1981, his second birthday, Arun Rangsi reached IPPL. We wondered how we could manage a gibbon who had been isolation-reared. We had read about baby monkeys who had been taken from their mothers by scientists like Harry Harlow and reared in horrible conditions. The monkeys would often become insane. 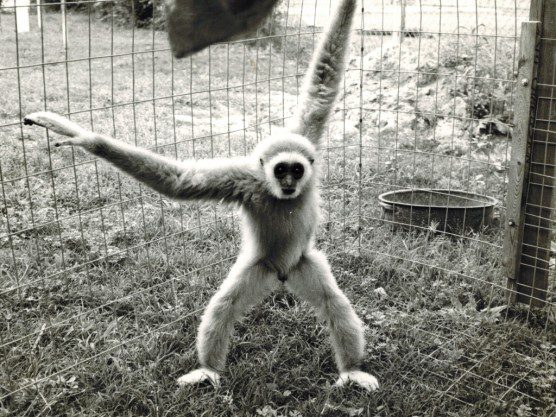 As Arun Rangsi grew up, he became more relaxed.

But with a lot of love, attention, and the companionship of other young lab gibbons who eventually joined him at IPPL’s growing sanctuary, Arun Rangsi seemed to put the dark days of the lab behind him. Amazingly, he grew up to be a wonderful companion for his mate Shanti and a great father to several babies. 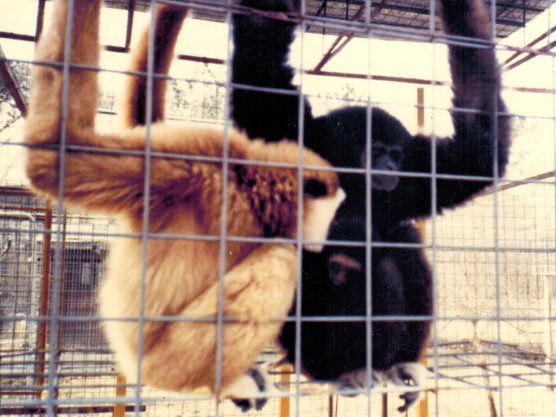 Arun Rangsi with his mate Shanti and their first baby, a boy we named Ahimsa. Shanti and Arun Rangsi are still together, and Ahimsa lives nearby with his companion Elizabeth.