Friedrich Wendl is an IPPL supporter and gibbon adopter. He works for the Austrian parliament, but he also has literally decades of experience as a gibbon handler. 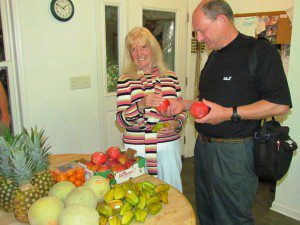 Shirley and the staff were delighted with the generous gifts of fruit Friedrich brought for the all gibbons.

Last week, he and his very patient friend and old army buddy, Johann Schmidt (who actually calls Omaha home now), came to visit the South Carolina Lowcountry for several days. But the main draw was not our beaches, our restaurants, or our historic plantations. (Did you know that Charleston was just voted the #1 city on the planet? This according to the latest Condé Nast Traveler Readers’ Choice Awards. Sweet!)

The main draw was IPPL! 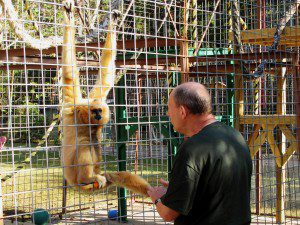 Tong allowed Friedrich to pat her foot—but she was not going to let go of that orange!

Back in 1988, Friedrich’s wife, a veterinarian, was asked to take in a confiscated two-year-old white-handed gibbon who, bizarrely, was living in some sort of day care center. Friedrich and his wife gladly agreed. They planned to keep her for just a few weeks.

But, as it happened, Pippi was already very much human-imprinted, and no zoo was interested in accepting her. She looked like she might be part of the family for quite a while. 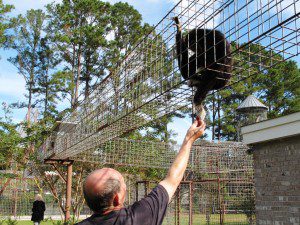 Michael was not about to turn down a fresh raspberry.

Friedrich and his wife then looked out for another gibbon to keep Pippi company, and the Austrian authorities found Zampi, a 15-year-old agile gibbon male who had been confiscated years before and was living alone at a small animal sanctuary. The facility was more suited to cats and dogs and such, and Zampi did not have the space or attention he really needed.

Pippi was afraid of the much older male at first, but eventually they learned to get along. Pippi and Zampi’s stay turned into a permanent living arrangement—and it turned Friedrich into a permanent gibbon lover. Friedrich and his wife built a huge outdoor run for the gibbons, with handy indoor access, onto the back of their home/vet practice. When a neighbor would occasionally complain of the noise, inspectors would come to check out the situation, see that the gibbons were living as well as possible in a captive environment, and leave it at that.

Friedrich had so many stories to tell of Pippi and Zampi. How Pippi can use a mirror to see that Friedrich was standing behind her. How Zampi exudes a reddish “sweat” just like our Tong does (especially in summer). How they can be territorial about visitors to the vet clinic. Some of their surprisingly favorite foods (like lychees or little bits of fish). 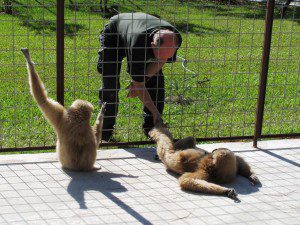 Friedrich tickles Courtney’s toes while Whoop-Whoop gets up his nerve to join in.

During his visit he spent a lot of time with his two IPPL adoptees, Tong the foodie and Courtney the goofball. He won over Tong with his gifts of oranges, lemons, and limes. In fact, he brought with him bags and bags of choice fruit—both fresh and dried—for our all gibbons to enjoy. Our caregivers were thrilled with the berries, the star fruit, and the new variety of papaya. Our gibbons have been spoiled rotten for days! 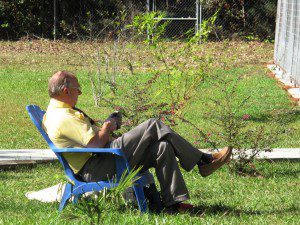 Friedrich’s patient friend Johann relaxes while Friedrich and Courtney wear each other out.

And he won over Courtney by playing endless games of “tickle” and “chase” with her (while his friend Johann took photos and, eventually, settled down with his paper). He even won over cautious Whoop-Whoop, who eventually decided it was safe to join in the fun (once Courtney had clearly figured out that everything was OK).

Friedrich says that in two years he’ll be ready to retire. An avid outdoorsman, he dreams of finally seeing gibbons in the wild, where they belong. But maybe we’ll also see more of him then—which will suit us fine. The IPPL gibbons do not mind being spoiled! 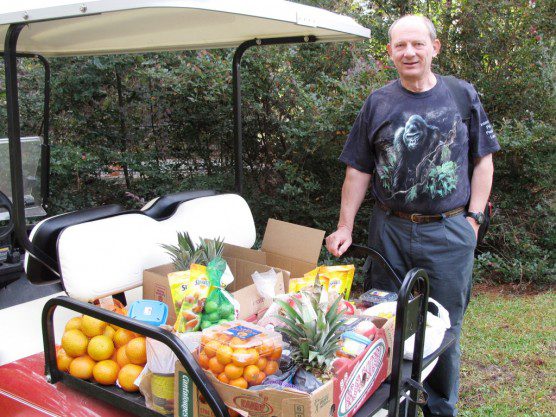 Friedrich’s extremely generous gifts were enjoyed by all the gibbons.