One of the most beloved epic stories in China is known as the “Journey to the West.” It’s the tale of a traveling monk who has, as one of his most resourceful companions, a wily monkey.

This week IPPL has been delighted to host as a visitor Dr. Linda Wolfe, a macaque expert and IPPL Advisory Board member. She has studied several species of macaque monkey for decades, and she told us of another epic primate journey. 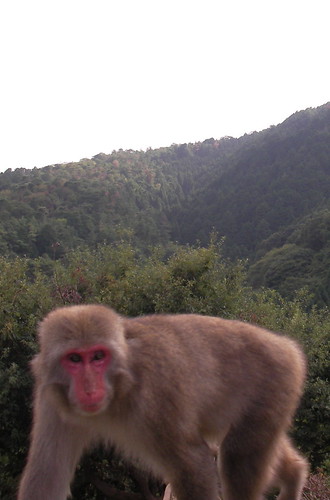 This story also begins in the East, but this time in Japan, on the mountain of Arashiyama, near Kyoto. While pursing a PhD in primatology back in the early 1970s, Linda was set to begin her dissertation research on macaque social behavior. She was interested in the reproductive rates and group behavior of Japanese macaque females. But she didn’t go east to Japan. She went to the Wild West: to Texas!

How did a troop of Japanese macaques wind up in Texas?

The mountain of Arashiyama was (and is) a popular Japanese tourist destination. The samurai had homes at this scenic spot by the Oi river, and they used to invite their mistresses to join them. Forty years ago, when arranged marriages were more the norm in Japan, engaged couples would often come to Arashiyama for romantic getaways.

Local entrepreneurs liked the idea of having monkeys around to amuse visitors and so began feeding the animals to induce them to stick around. But once the provisioning started, the monkeys’ reproductive rates doubled, and in a short time the troop went from 50 or 60 monkeys to about 200. The troop then split into two, and some monkeys even started coming into populated areas and causing problems for the villagers.

Researchers from the Wisconsin Primate Center were there at the time studying macaque vocalizations, and they offered to move one of the sub-troops from the mountain to an island off the coast of Georgia. This small sea island was privately owned, but at the last moment a death in the family resulted in the deal’s falling through.

This was something of a crisis, since the Japanese monkeys had already been captured and crated for the trip! What to do? Like good primates, the Wisconsin folks made use of their social connections and contacted primatologist Claud Bramblett at the University of Texas at Austin. He got in touch with a former student whose family owned a lot of land around Laredo, in the south of Texas; a few fences were quickly pulled together, and the Old World monkeys suddenly had a place to land in the New World.

There was one other problem, though. This was 1972, and anti-Vietnam War protests were going strong—and not just in the United States. In fact, there was a real concern that if Japanese students learned that some of the beloved monkeys of Arashiyama were going to the U.S., they would have protested the transfer.

So in the middle of the night, the Japanese Air Force picked up the 98 monkeys and flew them—not to Texas, but to Hawaii. In Hawaii, the U.S. Air Force took charge of the animals and brought them to Lackland Air Force Base near Laredo, then loaded the macaques into trucks and brought them to the ranch where their enclosures were waiting.

A year later, Linda joined them. “I had a lovely time,” she remembers, sitting out under the hot Texas sun and observing her amazing Japanese macaques. Even though they were nearly half a world away from their native home, in an alien and arid environment, they still displayed typical Japanese macaque behaviors, like their love of water. Linda remembers watching them play in the large ponds (called “tanks” in south Texas), dipping their monkey chow in the water to improve the flavor and texture of the dry biscuits. 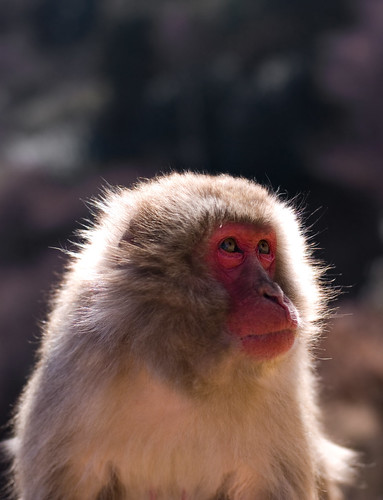 The descendants of those pioneering macaques—now known as the Arashiyama West monkeys and about 250 animals strong—are still in Texas, although the macaques have moved around a bit since Linda first got to know them. Mr. Dryden, who owned the Laredo property, passed away in December 1973, and his wife didn’t particularly want a bunch of monkeys on her ranch, so the monkeys were moved to a site near Dilley, Texas. From there, they were moved to the ranch of a caretaker, and (in the wake of a divorce) her family moved the monkeys to their current site, which became the Born Free USA Primate Sanctuary, near San Antonio (again, in Texas).

Linda lost touch with the monkeys for a while during these wanderings, but in the early 1990s she came to one of IPPL’s biennial Members’ Meetings and happened to meet someone who had done an internship at the Born Free facility. So, by 1995, Linda headed back to Texas to resume her relationship with her beloved macaques—but not as a researcher. Instead, she began spending her time there as a caregiver and experienced observer, doing censuses of the monkeys and helping with vet procedures. She still makes a Journey to the West of her own about once a year to visit them.