Last month I had a wonderful visit from Lori Powell of nearby Seabrook Island and her sister LuAnn Short, who was visiting from Florida. LuAnn was keen to visit IPPL as she knew I had been a friend of her heroine, the famous gorilla expert Dian Fossey. In 2008 LuAnn had even visited Dian’s former research station at Karisoke, which can be reached only after a stressful hike high into the Rwandan mountains. It was nice to meet someone who has made that trek; most gorilla fans are content to stay at lower elevations, where they can observe habituated gorilla groups with a guide. Karisoke remains off the beaten path. 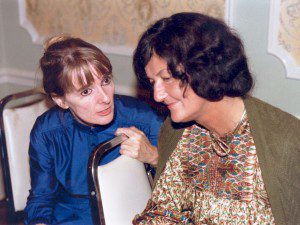 Oddly, Dian (who usually hated visitors) was always asking me to visit her, but I never took her up on it. I told her that I would come one day when the smugglers had quit smuggling!

Unfortunately, they never did, so I never got to visit Dian in her own habitat. She was a prolific correspondent, though, and sent me really long letters, all written on a manual typewriter by candlelight. You can read them online on IPPL’s Web site. Some of these letters date back to the mid-1970s and others, written in the 1980s, include the last correspondence I ever received from Dian: it’s dated October 17, 1985, just over two months before she died.

LuAnn Short took this photo of Dian Fossey’s grave marker, where the famous primatologist lies buried next to her favorite gorilla, Digit.

On the night of December 26, 1985, Dian’s life came to a sudden end. I got the news on the morning of December 27. I was lying in bed and picked up a phone call from Ann Pierce, who had done gorilla census work at Karisoke.

All she could tell me at the time was that “Dian is dead.” At first we both assumed that Dian had finally succumbed to emphysema, the result of a combination of her legendary smoking habit and a life lived, by her own determined preference, in a cold, damp environment.

Dian’s grave marker, which IPPL helped purchase and place, is still at the site.

I was horrified to finally learn the truth from the media. Dian had been found dead in her mountain cabin, slashed to death by a machete-bearing intruder. IPPL News published the U.S. State Department cable that gave the official details of the case.

During her life Dian had many enemies: poachers, disgruntled former employees, some of the students she had brought to Karisoke, and some Rwandan government officials. A foreign student at her camp was indicted and convicted by Rwandan authorities, but he has always denied that he had any involvement.

My good friend Evelyn Gallardo, who had visited Karisoke shortly before Dian’s death, was shocked to learn that, six months after the event, there was still no marker for Dian’s grave. When Evelyn drew this to my attention, we decided that IPPL should help with the costs of purchasing a marker for the site.

Evelyn designed a simple monument and had it installed at the Karisoke gorilla graveyard in 1986. There Dian rests, surrounded by the graves of some of her gorillas who were brutally slaughtered by poachers, including Digit, Uncle Bert, Macho, and Kweli. Evelyn wrote the text of the marker, which includes the words:

“No one loved gorillas more. Rest in peace, dear friend.” 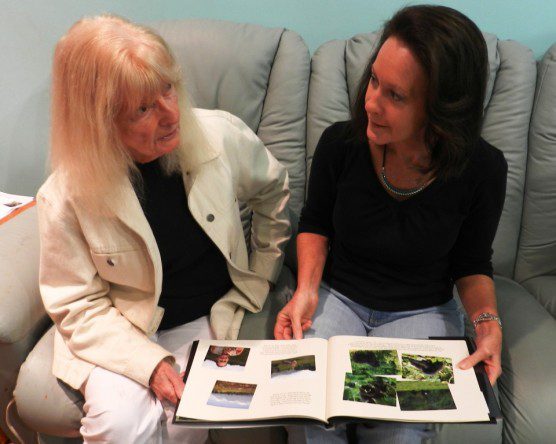 LuAnn Short (right) and I shared stories about Dian Fossey and her life and death among the gorillas she loved.

LuAnn had assembled a lovely photo book about her trip, which she titled “In the Mist with Gorillas – Rwanda – June 2008,” and she has kindly gifted IPPL with a copy. Thank you, LuAnn!

On the page with her photos of Dian’s grave marker, LuAnn wrote,

“The sight of so many gorilla graves was overwhelming. I knew Dian and Digit were buried here, but it was even more painful to see so many other gorillas here. They are still burying them here as bodies are found….”

As the founder and head of IPPL for close to four decades, I have met some truly remarkable primate field workers, but Dian Fossey was, in my opinion, the most remarkable of all. She had learned to live with what many people would think of as loneliness and extreme hardship. But for Dian, the gorillas were truly her family and friends; Karisoke is where she sincerely felt at home.